Cincinnati center includes Cincinnati Children’s Hospital Medical Center which is ranked as one of the top 3 pediatric hospitals in the USA and the University of Cincinnati. Most of our members are medical scientists and physicians. Most of our events focus around Israeli social gatherings and holiday celebrations. The Cincinnati Jewish community embrace the Israeli fellows and families and supports their adjustment in Cincinnati. Therefore, we have a strong and unique relationship with the Jewish community. 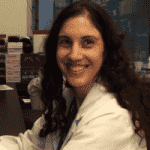 Nurit is a research associate in the Allergy and Immunology division in Cincinnati Children’s Hospital Medical Center. Nurit received her PhD from Tel Aviv University, under the mentorship of Prof. Ronit Sagi-Eisenberg where she investigated the mechanisms governing mast cell degranulation. In Cincinnati, Nurit’s research focuses on esophageal epithelial cells. Epithelial cells are uniquely positioned as the very first line of defense to recognize immune insults such as food antigens, proteolytic allergens and microorganisms. Nurit’s work is aimed at identifying the role of proteases and their inhibitors in the propagation of eosinophilic esophagitis (EoE), an esophageal allergic disorder. EoE is characterized by imbalance between proteases and their inhibitors in the epithelium. Loss of protease inhibitors unleashes an uncontrolled protease activity in the esophagus that results in impairment of the epithelial barrier. As a result food antigens can penetrate into the esophageal tissues and activate immune response.